One of my students, Kana Lopez, is starting data collection for her Master’s thesis and is recruiting Spanish-English bilinguals with aphasia. The study will be conducted online, so there are no geographical constraints, except that the person should be residing in the U.S.
Kana is running an intensive treatment study and recruiting 2 participants for the study. In addition to 8 weeks of free intensive language therapy, we will be giving participants a small gift card. Please see Kana’s message below. Interested individuals should contact Kana at klopez77@horizon.csueastbay.edu.
————————

My name is Kana Lopez. I am a graduate student at Cal State East Bay in the Speech, Language, and Hearing Sciences Department.

I am conducting a research project for my Master’s thesis about Aphasia and Bilingualism. I am recruiting two Spanish-English bilingual participants who have been diagnosed with aphasia. Below is a brief description of my study.

This study focuses on the impact of language learning environment on recovery from brain injury. The primary goal of the project is to better understand the causes of different recovery patterns in bilingual aphasia and to see how institutional language learning (also known as “explicit”) versus learning in a natural setting, such as at home (also known as “implicit”), impacts the recovery of language in bilinguals with aphasia.

I am looking for two participants who learned Spanish as their first language and learned English second, either in a classroom or naturalistically, and who had a stroke more than 6 months ago that resulted in aphasia.

Please feel free to distribute the flyer to potential participants or other professionals. Interested individuals should contact me at klopez77@horizon.csueastbay.edu.

I just found out that I got accepted into the NIH-funded 2-week fMRI training course at the University of Michigan to be held in August. This is a wonderful opportunity for me to learn about the physics of MRI, study design, and data acquisition and analysis. I’m looking forward to using this training to design a neuroimaging study of bilingual older adults that I can run at the new Center for Advanced Neuroimaging at UC Riverside.

Here is info on the annual course: https://fmri-training-course.psych.lsa.umich.edu/ 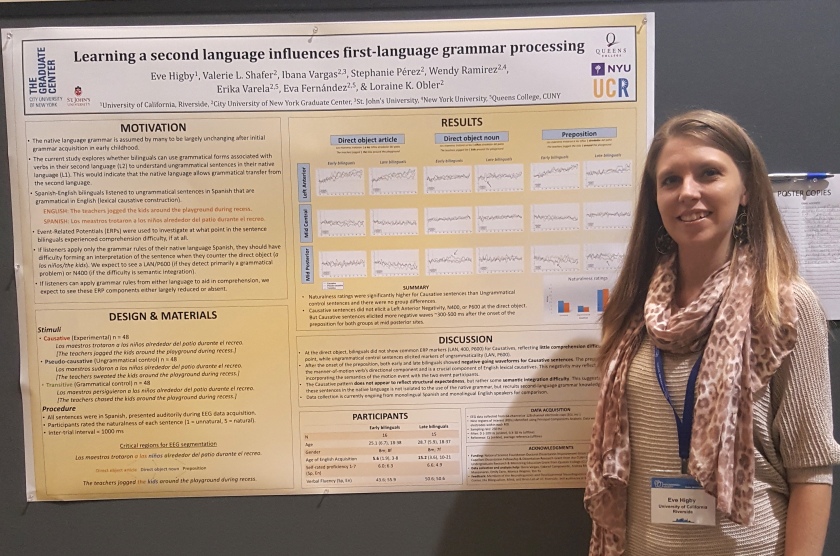 Last week I presented my work at two conferences. At the American Speech-Language-Hearing Association (ASHA) annual convention in Philadelphia, I was part of a special session on Bilingual Sentence Processing organized by Henrike Blumenfeld. My talk was titled “Using two languages to understand anomalous sentences.” I discussed how bilinguals have a large linguistic “toolbox” containing what they know about both languages. This toolbox is brought to use when comprehending language, thus allowing bilinguals to interpret sentences using any grammatical tools at their disposal.

I also presented two posters at the annual meeting of the Psychonomic Society, which was held in Boston. The first is also based on my dissertation data (pictured above), titled “Learning a second language influences first-language grammar processing.” Here I discuss how early and late bilinguals process sentences in their native language that are ungrammatical based on the native language grammar but grammatical in their second-language grammar. We are in the process of collecting data from Spanish and English monolinguals to use as comparison.

The other poster is a collaboration with colleagues at Brooklyn College and the Australian National University titled “A beneficial effect of orthography on native Spanish speakers’ ability to distinguish non-native phonemic contrasts.” This study looked at late bilinguals’ ability to distinguish four English phonemic contrasts (two consonantal, two vocalic) in pseudo-words with and without printed spellings. Their performance was also related to individual scores on an English decoding task and a second-language proficiency measure.

Copies of the posters can be found on my ResearchGate and Academic.edu profiles.

I am an Assistant Professor at California State University, East Bay.